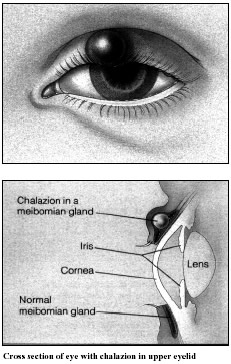 WHAT IS A CHALAZION?
A chalazion is an inflammatory reaction to trapped oil secretions. It is not caused by bacteria, although the site can be-come infected by bacteria as well. The term chalazion comes from a Greek word meaning a small lump. It refers to a swelling in the eyelid caused by inflammation of one of the small oil producing glands (meibomian glands) located in the upper and lower eyelids.
Chalazions tend to occur farther from the edge of the eyelid than styes and tend to “point” toward the inside of the eyelid.
Sometimes a chalazion can cause the en-tire eyelid to swell suddenly, but usually there is a definite tender point.

HOW IS A CHALAZION TREATED?
When a chalazion is small and without symptoms, it may disappear on its own. If the chalazion is large, it may cause blurred vision by distorting the shape of the eye.

Chalazions are treated with any or a combination of the following methods:
1. Warm compresses.
Warm compresses can be applied in a variety of ways. The simplest way is to hold a clean washcloth, soaked in hot water, against the closed lid. Do this for five to ten minutes, three or four times a day. Repeatedly soak the washcloth in hot water to
maintain adequate heat. The majority of chalazions will disappear within a week.
2. Steroid injections.
Injections can be useful after soaks have been tried and a small lump remains. A chalazion is sometimes confused with a stye which also appears as a lump in the eyelid. A stye is an infection of a lash follicle that forms a red, sore lump near the
edge of the eyelid.
3. Surgical incision or excision.
Large chalazions which do not respond to other treatments can be surgically opened after the early inflammation is reduced.
Cross section of eye with chalazion in upper eyelid Chalazions usually respond well to treatment, although some people are prone to recurrences and may require continuing medication. If a chalazion recurs in the same place, your ophthalmologist may suggest a biopsy to rule out more serious problems.

WHY ARE REGULAR MEDICAL EYE EXAMINATIONS IMPORTANT FOR EVERYONE?
Eye disease can occur at any age. Many eye diseases do not cause symptoms until damage has occurred. Since most blindness is preventable if diagnosed and treated early, regular medical examinations by an ophthalmologist are very important.