At the Pittsburgh Eye Institute, we pride ourselves in providing the highest quality of eye care. It begins with a professional and caring attitude...

LASIK (Laser Assisted In Situ Keratomileusis) is the most common vision correction procedure whereby a thin flap of the cornea is created which allows an Excimer laser to sculpt the inner layers of the cornea.
High Definition Custom LASIK is a fusion of the newest, safest, and most advanced technologies for LASIK. This combination of superb technological advances allows better outcomes than ever before. These advancements also allow more people to qualify for the procedure. Patients who have a high degree of astigmatism or thin corneas are examples.

LASIK is a two-step process. In the first step, our doctors create a small hinged flap in the cornea. In the second step, the flap is moved aside to allow for reshaping of the the cornea to correct refractive errors. 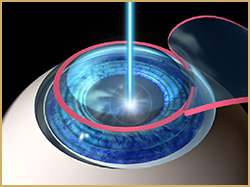 In the first step, many doctors still use a traditional hand-held surgical instrument with a blade called a microkeratome. Dr Findlan uses a femtosecond laser to create the corneal flap. The femtosecond laser gives him unprecedented control over the flap’s consistency and thickness, and it has a superior record of accuracy, safety, precision, and reduced complications compared to the microkeratome.

In a process that takes less than thirty seconds, the femtosecond laser delivers short pulses of light to a precise point within the central layer of the cornea. Each pulse of the laser creates a microscopic bubble of carbon dioxide and water. Instead of using a hand-held surgical blade, thousands of these microscopic bubbles are precisely positioned to create a flap of the exact diameter and thickness for the individual patient. The surgeon then lifts the flap aside to begin the second step, reshaping the cornea.

The second step of LASIK corrects the refractive error of the eye. For years, LASIK could only correct standard prescriptions used for glasses or contact lenses. Today, with wavefront technology, Dr. Findlan is able to detect and potentially correct more than just standard prescriptions. He can identify tiny visual imperfections called higher order aberrations that are individual to each and every eye. Until the advent of wavefront technology, it was not possible to measure or correct these visual imperfections. At the Pittsburgh Eye Institute, our commitment to the best technology allows us to offer our patients the broadest range of treatments possible. We have wavefront-driven treatments available not only for patients who are nearsighted, but also for those with farsightedness and astigmatism.

Lastly, Dr Findlan has the ability to utilize Iris Registration technology. The beautiful portion of your eye, the iris, is unique to each individual eye. These unique patterns on your iris are already used to identify people for security purposes. Iris Registration provides more precise treatments that improve the outcome of LASIK.

What is the difference between PRK and LASIK?

In the LASIK procedure a thin corneal flap is created with a device called a microkeratome or a femtosecond laser. The patient does not feel or see the lifting of the corneal flap, which only takes a few seconds. An excimer laser then reshapes the inner layer of the cornea. Afterwards, the flap is repositioned. The corneal flap begins to adhere within a few minutes. After LASIK, your vision should improve within the first 24 hours.

In the PRK procedure, a thin layer of corneal tissue is removed with an alcohol solution and then an excimer laser is then used to reshape the cornea. After the procedure the patient is fitted with a bandage contact lens to improve comfort during healing. The bandage lens is usually removed within the first week, and the patient uses drops to increase comfort and promote healing. It can take several weeks for vision to stabilize, which is one reason LASIK has become the procedure of choice for many surgeons and patients. Some patients will be better candidates for PRK however because they have thin or slightly irregular corneas. 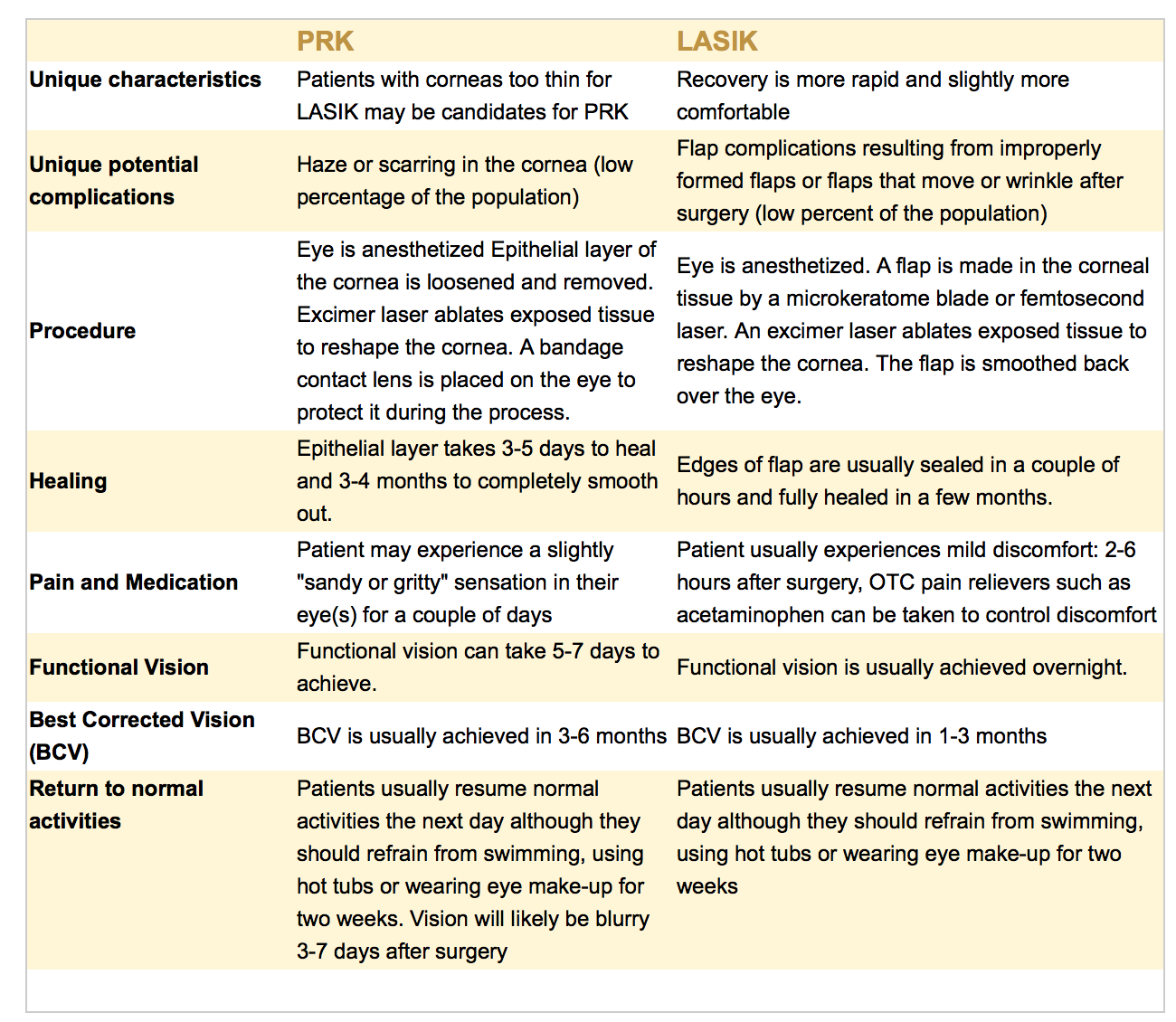 How is the LASIK corneal flap created?
In LASIK, the flap is created one of two ways: with a microkeratome blade or femtosecond laser.

Is there an advantage of the femtosecond laser or microkeratome blade in creating the flap?
Femtosecond laser is rapidly becoming known as a key ingredient to optimizing visual results in laser vision correction surgery. In traditional surgery, the corneal flap is created with a microkeratome, a metal blade within a mechanical hand-held device. While this generally provides good results, the procedure can result in complications because it is difficult to ensure an accurate depth and consistent thickness of the flap with blade technology. By replacing the traditional microkeratome blade approach with a silent, tiny beam of laser light, the femtosecond laser reduces the risk of complication in creating the corneal flap; in fact, more patients may be candidates for laser vision correction due to this unique level of precision that was previously unavailable. The femtosecond laser creates the corneal flap with a precisely predetermined pattern and depth. This laser precision offers a unique level of safety in the creation of the corneal flap, and enables the surgeon to safely create a corneal flap of precise shape and thickness. In the past, people with corneas too thin, flat, steep or irregular weren’t considered good candidates for LASIK. With the femtosecond lasers high degree of accuracy we are now able to help many more people reduce their dependency on glasses and contacts.

What is the difference between Conventional LASIK and Custom LASIK?
Custom LASIK, also called Wavefront or CustomVue LASIK, allows for a more customized treatment based on 3-dimensional measurements of your eye. The wavefront technology uses light to make a map of your eye. While two people can have the same eye prescription, no two people have the same wavefront measurements. Custom LASIK usually results in fewer “higher order” aberrations, tiny imperfections which affect your overall quality of vision, such as visual glare and halos. Given that Custom LASIK can treat higher order visual aberrations that cause problems such as starbursts, halos, and decreased contrast sensitivity, Custom LASIK appears to be more effective than Conventional LASIK.

Will I still need glasses or contacts after Custom LASIK surgery?
It is unlikely. According to a study conducted by the FDA, every CustomVue LASIK participant achieved 20/40 vision or better (meaning they could play sports or drive a vehicle without corrective eyewear) within six months of the procedure. Ninety-four percent achieved 20/20 vision, and 74 percent achieved better than 20/20 vision.

How do I know if I am a candidate?
The ideal candidate for laser vision correction is an individual at least 21 years of age or older and has healthy corneas. Your vision should also be relatively unchanged over the last year. People with certain medical conditions are not candidates for laser vision correction. It is best to consult with Dr. Findlan at the Pittsburgh Eye Institute during your complimentary consultation to determine whether LASIK is the best choice for you.

Is LASIK safe? What are the risks involved?
More than one million procedures are performed each year in the United States. Seldom does a complication affect visual outcomes. As with every medical procedure, there are risks involved with Laser Vision Correction. You will receive a thorough explanation of all the risks and benefits involved with these procedures when you meet with Dr. Findlan.

When will I be able to see?
Many patients can read the clock on the wall in the laser room immediately after LASIK. You will also be able to sit up to look out at the nature scene through the windows without glasses or contacts for the first time. Many patients are already thrilled with the results. However, your vision will appear to be somewhat ‘steamy’ for several hours following surgery. Your sight may fluctuate for a few weeks following your procedure, but will improve during that time. It’s important that patients have realistic expectations. While not all patients undergoing LASIK gain 20/20 vision, most see at least 20/40 or better the day after the procedure. That qualifies an individual to pass a driver’s license exam without wearing glasses or contact lenses.